Create a faction and go solo or join friends on a journey to
become the best in this MMO based game.​

What is Factions?
This is a gamemode where you create a faction, form alliances and create enemies (in a friendly competitive sense) and work towards becoming the greatest faction! The main goal is to become the wealthiest and most powerful on the server. This is achieved through grinding MCMMO and farming anything and everything to sell at the in game shop. One of the really fun things about factions is being able to raid other players bases. So make sure to protect yours as well as you can to prepare for the attacks of your enemies!


• To create a new faction it costs $1000. You create a faction by running the command /f create <Name>. Remember to keep these names appropriate as they are public so everyone can see it!​
(Additional faction commands can be viewed by doing /f.)​
• To access your kits, run the command /kit. Donors do have additional kits.​
• The maximum power is 10. You lose 2 power each time you die and gain 1 power for every kill.​
• Handle your money by using /money. (Check your balance, send money or show the money leaderboard.)​

• This feature is extremely customizable! It allows you to create your own hierarchy and social classes within your faction.​
- To manage ranks do /f ranks.​
- To manage permissions do /f perms.​
• When customizing ranks and permissions you will be asked to set a privilege level. Privilege level is an integer from 0 to 1,000. This number can never surpass 1,000. The "Leader" rank will always have ALL permissions. ​
• Every faction has two default ranks: "Leader" and "Recruit". Only one member can have the "Leader" rank while multiple players can be assigned to another rank. This "Leader" rank can never be edited, but all other ranks can be edited. ​
• A faction can have as many ranks as they want. Ranks are created for free and can be assigned to any other player aside from the Leader. The "Leader" rank can only be transferred to another player by doing /f leader <Player>. Remember, this will give your position as leader to this player, it will not be a shared rank.​
Claim Permissions and Settings:

• The permission "Rename Claim" (/f nameclaim <New Name>) allows the player to name a factions claim whatever they want. Make sure these names are appropriate as everyone who walks into your claimed territory will see it!​
• The permission "Edit Claim Privilege" (/f claimpriv <Privilege>) allows the player to set how much privilege is required to build, use doors, or access chests in a faction claim. If the leader sets the privilege for his storage room to 800, only faction members with a rank that was 800+ privilege will be able to interact with items in that claimed chunk.​
Warps:

• Doing /warp list lists all of the available warps. Certain ones do require you to pay money or have a specific rank to teleport there.​
• There is a warp to our in game shop where you can sell and buy items. ​
• There are four outposts (North, East, South and West). Currently, there are no rules on camping outside of warps/spawn to get kills and raise your power. ​
• For our donors we have a lounge! In this lounge there are exclusive spawners that are for sale on the second level.​
• Run the command /wild to teleport to a random area in the wilderness. This command does have a five minute cooldown.​
​
Auction House:

• The auction house is where you can "sell" items in a bidding war! Here you can auction any items (even those that aren't included in the in game shop). Set a starting bid, time limit and include a "buy now" price. The "buy now" price are for those who really want that specific item and are willing to pay the amount you've set. If not, take your chances with the bidding!​
• Doing /ah gives you a list of the different commands you can use for this feature.​
• Members can put up one item for auction at a time for 10 minutes, donors can place more items up for auction.​ 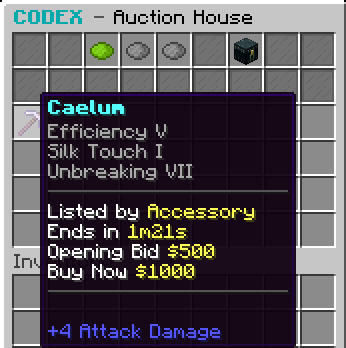 • More home can be purchased using /buyhomes <#> for 10 kilobytes each.​
- Set a home by doing /sethome <Name> and teleport to your home using /home <Name>.​
• Vaults can be created by using /vault create <Name>.​
- Access your vaults by doing /vault.​
- More vaults can be purchased by using /vault buy <#> for 25 kilobytes each.​
- Vaults have 27 slots by default. To upgrade your vault and get 54 slots, do /vault upgrade <Name>. This costs 15 kilobytes.​
​
Loot Crates: